Another attempt was made by Washington Parish Jail inmates to bribe a jail deputy. On June 5, 2019, inmate Andre Dune Lucas (27) asked a jail deputy if he was interested in making some money. The deputy notified his supervisors who authorized him to continue the conversation with the inmate. 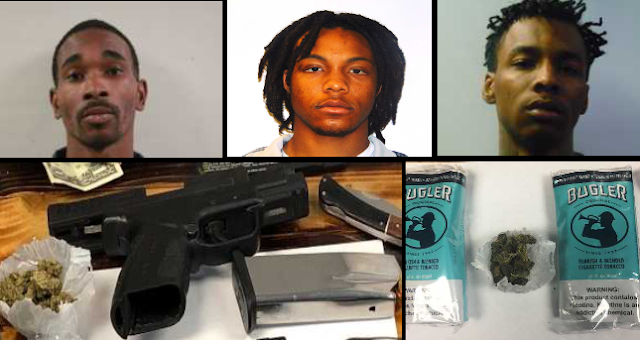 During his next routine round through the jail, the deputy was once again approached by Lucas who repeated the offer and stated that all the deputy had to do was bring him some Bugler tobacco and narcotics. The deputy expressed interest in the offer and Lucas provided him with phone numbers to contact a person in the community.

The deputy later called the numbers and spoke with Kekouya Dakonya Jackson, Jr. (18),  a resident of Highway 21 near Angie. Arrangements were made for Jackson and the jail deputy to meet at a certain time in the Pine area on June 6, 2019 for Jackson to give narcotics and tobacco to the deputy. That night, the deputy met Jackson at the pre-arranged location at which time Jackson gave him marijuana and tobacco to deliver to the jail with the agreement that payment would be made after the items were delivered.

While the transaction was occurring, Chief of Corrections Jim Miller, a jail sergeant and drug task force detectives were in the area. They were notified when Jackson left the scene and pursued him, making a traffic stop on Highway 62. When approaching Jackson’s vehicle, a drug task force detective observed a pistol on the seat next to Jackson. Jackson was arrested and booked into the jail on charges of possession of a stolen firearm, distribution of illegal narcotics, possession of illegal narcotics with a weapon present and criminal conspiracy.

Meanwhile, an internal jail investigation revealed that another inmate, Malik Robinson (21), was also involved in the conspiracy. Both Robinson and Lucas were arrested on additional charges of criminal conspiracy after warrants were signed by a 22nd Judicial District Judge.

“Once again,” stated Sheriff Randy Seal, “the integrity of our jail deputies prevailed. They did what was right and the outcome was good. Jail officers are the unsung heroes of the criminal justice system. Their job is very difficult as they deal daily with the most dysfunctional members of our society. My hat is off to them for a job well done.”