A traffic stop by Mandeville Patrol Officers Sunday (April 21, 2019) led to the arrest of ReJean Wright (20) of Harvey and Kierra Murphy (19) of Mandeville and the discovery of burglary tools, three firearms, ammunition, marijuana, and drug paraphernalia. 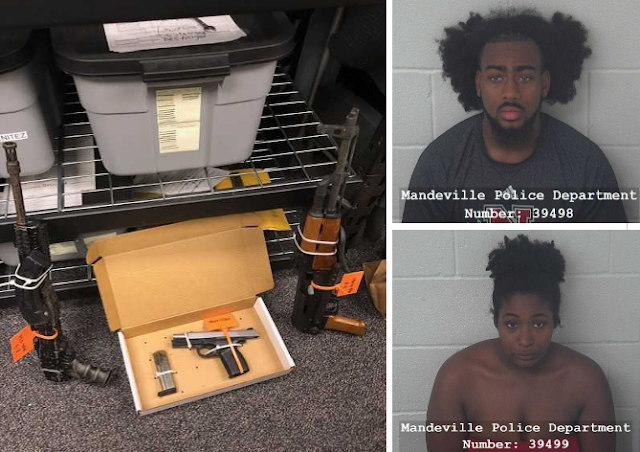 The traffic stop was for an expired MVI sticker; however, officers detected the odor of marijuana. A search of the vehicle produced marijuana, a Smith and Wesson semi-auto 9mm pistol, a Century Arms AK style semi-auto 7.62x39 rifle, and a Ruger 10/22 semi-auto .22 caliber rifle. Approximately one hundred rounds of AK ammunition, as well as spent shell casings, were found with the weapons, along with two masks and two pairs of gloves and a crowbar. Those weapons and ammunition along with the spent casings were seized and will be submitted to the Louisiana State Police Crime Lab to be compared and tested to try and determine if they had been used in previous crimes, in other jurisdictions.

Police Chief Gerald Sticker made the following comments in his press release: “As chief, I am proud of the proactive police work conducted by our officers. Criminals pay no attention to jurisdictional boundaries but Mandeville remains a safe community because we are vigilant, always looking beyond the traffic violation.”