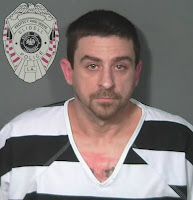 and home invasion of a 92-year-old World War II veteran.

Last Thursday evening (December 13, 2018), Slidell Police responded to a report of a home invasion at Lafittes Landing retirement community on Gause Blvd. in Slidell. The victim stated that a person knocked on his front door around 5:45 p.m. and, when the victim opened the door, the suspect brandished a firearm and forced his way into his home. The suspect robbed him of his cash, medications, and his car keys and then stole the war veteran’s 2006 black Chevrolet Malibu car, and fled the area.

Gabriel was identified from video surveillance and was located and arrested for an outstanding child support warrant while detectives continued to investigate the home invasion. The investigation linked Gabriel to the robbery and the victim's vehicle was located abandoned in Lacombe. Gabriel was then booked with Armed Robbery by use of a Firearm, Felon in Possession of a Firearm, and Theft of a Motor Vehicle.

The St. Tammany Parish Sheriff's Office has also linked Gabriel to a similar robbery in the Lacombe area and Gabriel is facing separate charges from that incident.


UPDATE:
The St. Tammany Parish Sheriff’s Office arrested Gabriel later on Monday (December 17, 2018) at the Slidell Police Department for the armed robbery that occurred December 13, 2018 in the Lacombe area. Gabriel reportedly confessed. In the Lacombe incident, a resident heard a knock on his door and, when he opened the door, a man, now identified as Gabriel, was pointing a pistol at him. With a bandanna covering his face, Gabriel demanded money and fled the scene with a small amount of cash, a revolver and two bottles of prescription medication. Slidell Police recovered the stolen firearm while conducting a search warrant at Gabriel’s home relative to their investigation.