Suspects Sought in Pair of Crimes in Hammond 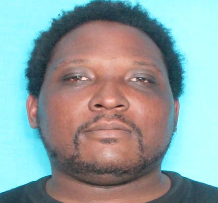 The Tangipahoa Parish Sheriff's Office in seeking suspects in two separate and unusual crimes: a burglary in which the suspect forced entry through the drive-thru window and an armed robbery in which the suspect fired shots almost indiscriminately.
The first, is 31 year old Eric Revish of Hammond, a suspect of a Subway burglary on January 5, 2023. Revish has been identified in security footage as the male seen walking through the store on University Avenue after forcing entry through the drive-thru window. Revish was identified through several investigative measures, including a tip received through Crime Stoppers of Tangipahoa.
The second, is the suspect of an armed robbery which occurred just before 8:00 PM on Saturday January 7, 2023. A black male entered the Sunoco (formerly Happywoods Market and Deli) after committing a robbery outside of the store and fired off a handgun. The cashier reportedly overheard an exchange of gunfire outside the establishment, and was able to flee from the front of the store when he observed the subject running towards the front door. As seen in security footage (see below), the suspect entered the store wearing a black mask over his face, and fired one round into the front counter. The subject proceeds to the cash register where he fires several more rounds into the drawer in order to force it open. While removing cash from the till, the subject is seen inadvertently firing several more rounds while fumbling with the cash.
Update: Suspect identified as Robert Rheams, the deceased suspect from a home invasion on Klein Road, which took place approximately eight hours following the armed robbery. Detectives were able to construct a time frame of Rheams criminal activity which started around 8:00 PM with the armed robbery. Several hours later, Rheams commits the carjacking, followed by the home invasion where he was shot and killed by the homeowner shortly after 5:00 AM. Click here for that story
Chief Travis asks anyone with information regarding the whereabouts of Revish or the identity of the armed robbery to call the Sheriff's Office at 985-345-6150,  or if you wish to remain anonymous, call Crime Stoppers of Tangipahoa’s anonymous tip line at 1.800.554.5245 or visit www.tangicrimestoppers.com and click on the P3 Tips icon or Submit A Tip! You may be eligible for a cash reward.
**All persons accused of a crime are considered innocent until proven guilty.**
at 1/11/2023 04:21:00 PM