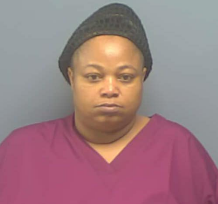 Earlier this week, the TPSO received an anonymous tip that a student purchased "edible Marijuana" from a school employee. TPSO Narcotics agents began investigating the complaint and soon identified Cohn as the suspect.

While Cohn was not an employee of the Tangipahoa Parish School System, she was working as a substitute cafeteria worker at Sumner High School at the time of her arrest. According to Superintendent Melissa Stilley, Cohn was employed by ESS, a staffing service used to place substitute employees in schools.