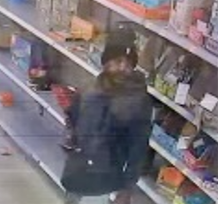 The State Fire Marshal's Office announced today (December 28, 2022) the arrest of a Hammond man for the Christmas Eve fire inside a heavily-occupied Walmart store in Hammond. Terrence Michael Coe (age 43) was booked into the Tangipahoa Parish Jail on Tuesday, December 27, 2022 on one count each of Aggravated Arson, Attempted 2nd Degree Murder, Armed Robbery and Terrorism.

Around 6 p.m. on Saturday, December 24, 2022, the Hammond Fire Department responded to a call for a fire inside the Walmart store located in the 2700 block of W. Thomas Street. The fire was contained to the paint aisle of the store thanks to quick-acting employees and customers who utilized fire extinguishers to put out the blaze. Despite the store being occupied by at least 500 customers and employees at the time of the fire, no one was injured and the store was evacuated safely.

Investigators quickly determined the fire was intentionally set and pinpointed a suspect seen on the store’s surveillance video. Shortly after sharing still images from that video with our media partners and with the public via social media, the investigative team was able to identify the suspect as Coe.

Coe reportedly admitted to investigators he set the fire in an effort to distract from his efforts to steal various items from the store.

The SFM would like to thank the Hammond Fire and Police Departments for their partnership in this case and for the assistance of the media and public for their contributions to closing this case so quickly.