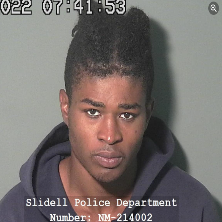 On December 10, 2022, a victim parked her vehicle outside of her residence, at the intersection of Treme and Barracks streets in New Orleans. As she walked to the front door, 22-year-old, Shampain Shaquan Derrick Poole. Poole reportedly approached the victim, armed with a handgun, and demanded the victim’s keys and cellphone.

The victim complied and the suspect fled in the victim’s vehicle. NOPD positively identified Poole as the perpetrator of the armed robbery and obtained a warrant for his arrest. Earlier this week, an alert citizen called Slidell Police and stated they saw a subject matching his description staying at a local motel. Slidell PD entered the room, and found Poole hiding in the bathroom. He was taken into custody, without incident.

Poole was booked into the Slidell City Jail as a fugitive, and will be extradited back to New Orleans to face his charges.

All persons are presumed innocent until proven guilty.