An area of low pressure is developing about 100 miles north of Puerto Rico and is forecast to move northward or northwestward further into the southwestern Atlantic today. Environmental conditions appear generally conducive for additional development. A subtropical or tropical depression is likely to form early this week while the system turns westward or west-southwestward over the southwestern Atlantic. There is an increasing risk of coastal flooding, gale-force winds, heavy rainfall, rough surf, and beach erosion along much of the southeastern United States coast, the Florida east coast, and portions of the central and northwestern Bahamas during the early to middle part of this week. Formation chance through 48 hours...high...70 percent and formation chance through 5 days...high...90 percent.

A well-defined low pressure area is located several hundred miles east of Bermuda. A short-lived tropical depression or storm is likely to form later today while the system drifts slowly over the central Atlantic. Thereafter, the system is forecast to turn northeastward and merge with a strong cold front by the middle part of this week. Formation chance through 48 hours...high...70 percent and formation chance through 5 days...high...70 percent. 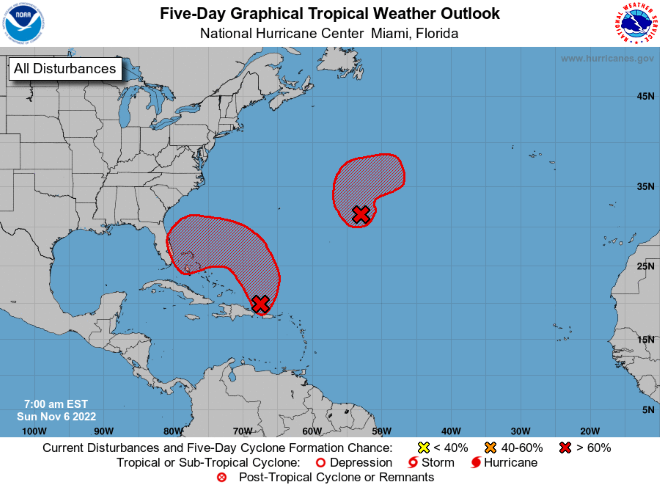