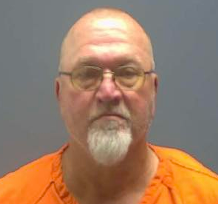 The TPSO's Juvenile Division was contacted by the principal of a Hammond area school, after they discovered Addison (a contracted bus driver) had been communicating inappropriately with a female student.

As a result of the investigation, Addison was arrested and charged with Pornography Involving Juveniles, Indecent Behavior, and Computer-aided Solicitation of a Juvenile

Prior to the arrest, the school issued a statement to parents informing them of the investigation, and stating the subject was no longer associated with the school in any way.