Hurricane Earl is heading away from Bermuda and located about 190 miles east northeast of Bermuda with maximum sustained winds of 100 MPH. Earl is forecast to become a powerful post-tropical cyclone as it moves to the southeast of Newfoundland Saturday and Sunday and and then gradually weaken through early Monday.

A gale-force low pressure system is located about 1100 miles east of the Leeward Islands. It is becoming less likely that a short-lived tropical storm will form. The disturbance is forecast to move generally west-northwestward near 15 mph across the central subtropical Atlantic. Formation chance through 48 hours...low...30 percent and formation chance through 5 days...low...30 percent.

A tropical wave is located several hundred miles south of the Cabo Verde Islands. Development of this system, if any, is expected to be slow to occur while it moves westward or west-northwestward at 15 to 20 mph across the eastern and central tropical Atlantic through the middle of next week. Formation chance through 48 hours...low...near 0 percent and formation chance through 5 days...low...20 percent.

Disturbance 4. Near the Coast of Africa

Another tropical wave is forecast to move off the coast of Africa by early next week. Some gradual development of the wave will be possible after it moves over water and heads generally westward over the far eastern Atlantic. Formation chance through 48 hours...low...near 0 percent and formation chance through 5 days...low...20 percent. 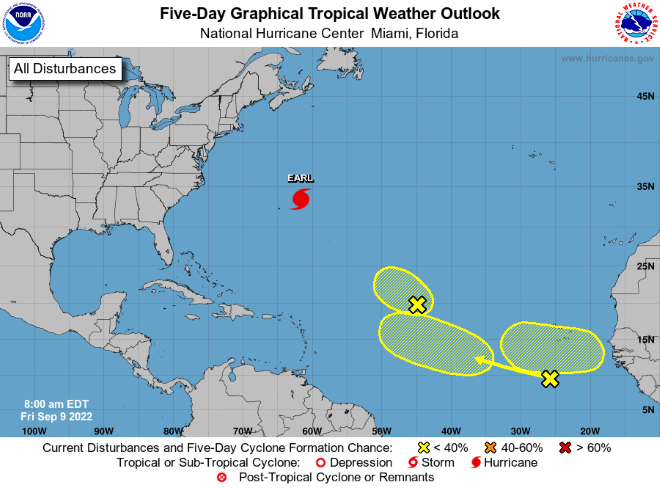