Hurricane Earl is located about 485 miles south of Bermuda with maximum sustained winds of 85 MPH and moving north at 6 MPH. A Tropical Storm Warning is in effect for Bermuda.

Hurricane Danielle is located about 690 miles northwest of the Azores with maximum sustained winds of 80 MPH and moving northeast at 14 MPH. A slow counterclockwise turn is forecast Friday and early Saturday, followed by a turn toward the south-southeast to southeast over the weekend. There are no coastal watches or warnings in effect.

An area of low pressure is located several hundred miles west of the Cabo Verde Islands. Environmental conditions appear conducive for additional development of this system over the next couple of days, and a tropical depression could form over this period while it moves westward to west-northwestward at 15 to 20 mph over the eastern and central tropical Atlantic.  After that time, upper-level winds are forecast to become less conducive for development. Formation chance through 48 hours...medium...60 percent and formation chance through 5 days...medium...60 percent.

A tropical wave currently located near the west African coast is forecast to emerge offshore into the eastern Atlantic over the next day or so.  Environmental conditions appear conducive for some gradual development thereafter as the system moves west-northwestward over the eastern tropical Atlantic. Formation chance through 48 hours...low...near 0 percent and  formation chance through 5 days...low...30 percent. 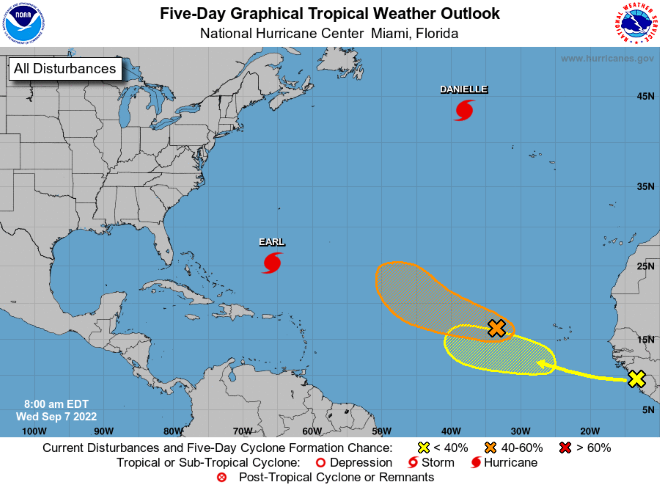