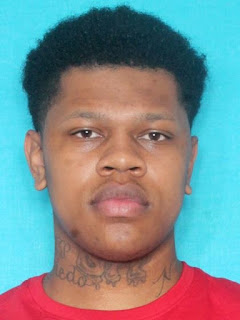 On Sunday (September 18, 2022) morning, Daevon Gay was arrested in Houston, Texas as a fugitive from Bogalusa, wanted for Second Degree Murder.

Warrants had been obtained for Gay for Second Degree Murder, Illegal Use of Weapons, and Possession of a Firearm by a Convicted Felon. Gay is accused of fatally shooting Jawalski Wiley on August 27, 2022 on Atlanta Street in Bogalusa. Detectives quickly identified Gay as the suspect in Wiley’s murder after witnesses were interviewed, and a search for Gay has been ongoing. Detectives had information that Gay had fled to Houston, and have been in contact with Houston Detectives.  Then on Sunday morning, the Bogalusa Police Department received an anonymous tip from a caller in Houston, giving Gay’s location at an apartment complex. Houston P.D. was contacted, located Gay, and he was arrested. He is currently being held in Harris County Jail awaiting extradition proceedings.

Gay is the second Bogalusa murder suspect currently housed in the Harris County Jail. Just last week Detectives identified Broderick Chatmon Jr. as the suspect in the murder of Typolia Peters Jr., that occurred in August of last year. Chatmon is being held in Harris County on weapons charges, and a hold was placed on him as a fugitive from Bogalusa for First Degree Murder and other charges.