An area of low pressure located several hundred miles east of the Lesser Antilles has changed little this morning.  Although environmental conditions are only marginally conducive, additional gradual development of this system is expected and a tropical depression is likely to form within the next couple of days.  The disturbance is forecast to move slowly toward the west-northwest, toward the adjacent waters of the northern Leeward Islands. Formation chance through 48 hours...medium...60 percent and formation chance through 5 days...high...80 percent.

A broad area of low pressure located between the west coast of Africa and the Cabo Verde Islands have become slightly better organized. Some gradual development is possible, and the system could become a short-lived tropical depression over the far eastern Atlantic during the next couple of days.  By late this week, environmental conditions are forecast to become increasingly unfavorable for further development. Formation chance through 48 hours...medium...40 percent and formation chance through 5 days...medium...50 percent.

An area of low pressure has formed along a decaying frontal zone over the central subtropical Atlantic about 850 miles west-southwest of the westernmost Azores.  Environmental conditions are expected to be conducive for development, and a tropical or subtropical depression is likely to form during the next few days while the system drifts generally eastward. Formation chance through 48 hours...medium...60 percent formation chance through 5 days...high...70 percent. 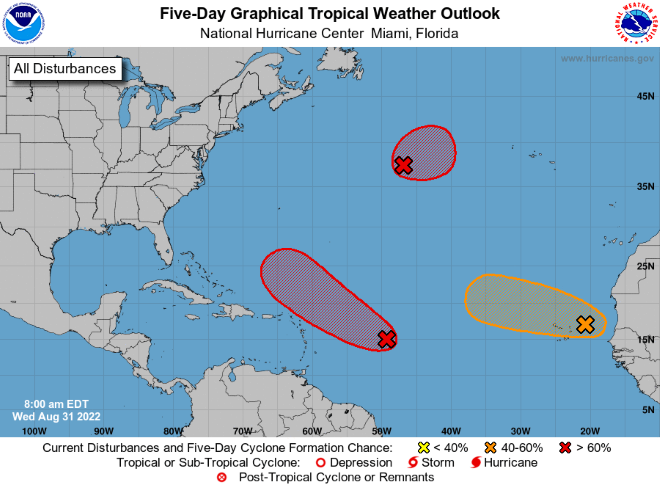