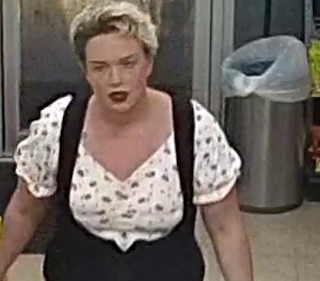 A woman, wanted for stabbing a Ponchatoula store clerk multiple times and featured in a BOLO put out on social media by the Ponchatoula Police Department, was located Tuesday (August 30, 2022) morning in St. Tammany Parish.

The story begins in Ponchatoula on August 26, 2022 at around 10:30 PM when Ponchatoula PD officers and Detectives were dispatched to Shan’s Quick Stop at the corner of N. Hoover Road and Hwy 22 East in reference to a hold up alarm. Officers located a male victim inside the store that had been stabbed multiple times. The victim was transported by Acadian to the hospital and is expected to recover. The suspect had already fled the scene. Detectives reviewed surveillance video and could see the suspect go behind the counter and started stabbing the clerk. The suspect's photo was released on social media.

The story ends in St. Tammany Parish on August 30, 2022 at around 7:30 AM when a St. Tammany Parish Sheriff’s patrol sergeant observed a dark blue Nissan Frontier pickup, flipped over in the wood line near the intersection of Louisiana Highway 1088 and Louisiana Highway 36. When he stopped to offer assistance and to check on the driver, the sergeant was confronted by a distraught woman wielding a knife and threatening to kill herself. He called for backup, and more deputies responded to the scene. The woman stabbed herself multiple times before the deputies were able to use non-lethal means to subdue her. They removed the knife from her possession and took her into custody. She was transported by emergency medical personnel to a local hospital. The woman was identified as 32 year-old Tabitha Mielke of Lacombe and matched the description of the woman wanted for stabbing the store clerk in Ponchatoula.

Upon her release from the hospital, Mielke will be booked into the St. Tammany Parish Correctional Center as a fugitive on warrants from Ponchatoula charging Mielke with Attempted 2nd Degree Murder, Vehicle Burglary, and Terrorizing. Louisiana State Police is handling the crash.

**all persons are presumed innocent until proven guilty**