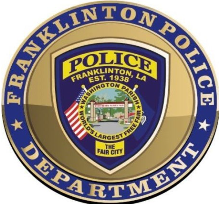 The first shooting occurred at the Greenlaw Event Center on July 24, 2022 at around 12:21 AM. The gunshot victim in the case was identified as 44 year-old Kenyatta Scott while seeking treatment at Our Lady of Angels Hospital in Bogalusa after being shot again in Bogalusa a few days later. According witnesses, Scott was shot inside the event center as a result of two other subjects fighting and Scott is not believed to have been the intended target. The identity of the shooter has not been identified and the investigation is ongoing.

The second shooting occurred near the Fairgrounds Apartments on July 25, 2022 at around 4:53 PM. No one was injured. 24 year-old Malik McClain was arrested and charged with Aggravated Assault with a firearm after a physical altercation took place with another individual. McClain was turned over to the Washington Parish Jail pending bond.

The third shooting occurred at the Franklinton Youth Football Field in the 1500 block of Bene Street on July 28, 2022 around 8:22 PM. The shooting followed a physical altercation. No victims have been identified or reported in the case. Detectives have identified potential suspects in the case. However, without a victim or complainant, no arrests have been made.