At approximately 8pm on Saturday (July 16, 2022 ) night, St. Tammany Parish Sheriff's Office deputies
conducted a traffic stop on a silver Honda Accord near the intersection of N 18th Street and Beulah Street in Lacombe and discovered approximately two pounds of marijuana, 30.5 oxycodone pills, drug paraphernalia, a semi-automatic pistol, an AR style semi-automatic pistol, and $2,986.00 in US currency which was believed to be proceeds from narcotics sales. 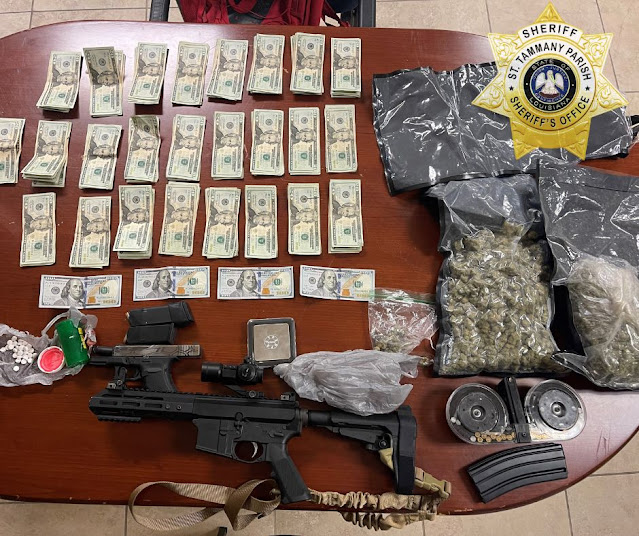 The driver of the vehicle, who is a current Baton Rouge resident and originally from Lacombe, has been identified as 24 year old Jason Peter Leblanc. Leblanc arrested and booked into the St. Tammany Parish Correctional Center on the charges of possession of a firearm while in possession of CDS, possession with the intent to distribute Schedule I (Marijuana), transactions involving proceeds from drug offenses, possession of drug paraphernalia, possession of Schedule II (Oxycodone), stop sign, highway laned for travel, turn signal, expired registration, and driving under suspension.

“This is yet another example of how proactive policing results in criminals being arrested and drugs being taken off our streets,” Sheriff Randy Smith said. “I applaud these deputies and we will not tolerate individuals who choose to deal drugs in our community.”