21 Year-Old Seemed to be Begging to be Arrested – So Slidell Police Did! 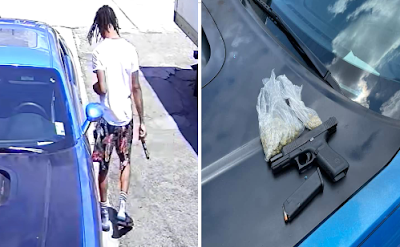 A Baton Rouge man was arrested by Slidell Police Friday (July 8, 2022) afternoon for being in possession of numerous stolen checks (taken from a U.S. Postal Service mailbox), a stolen vehicle, and numerous narcotics and weapons charges.

Slidell Police Detective Ben Williams observed 21-year-old Rashawn Robinson-Mills of Baton Rouge pulling a pistol from his waistband, while leaving a gas station. Robinson-Mills got into a 2016 Dodge Challenger, which was stolen and had a switched license plate. When stopped, Robinson-Mills was found to be in possession of 50+ stolen checks, which were taken from a U.S. Postal Service mailbox in the Baton Rouge area. In addition, Robinson-Mills had an outstanding warrant from Pascagoula for fraud-related charges.

Due to several mail thefts recently from U.S. Postal service mailboxes, federal authorities were contacted and are expected to file additional charges against Robinson-Mills.