Disturbance 1. Western Gulf of Mexico: The area of low pressure near the southern coast of Texas is showing limited signs of organization. The disturbance is forecast to turn northward and move slowly inland over southeastern Texas later today. Slow development of this system is possible while the low remains over water and it could still become a short-lived tropical depression before it moves inland. Formation chance through 48 hours is at 40% and formation chance through 5 days is also at 40%.

Disturbance 2. Potential Tropical Cyclone Two is expected to bring hurricane and tropical conditions along the Caribbean coasts of Nicargua and Costa Rica late Friday, as well as to the Colombian island of San Andres.

Disturbance 3. Western Tropical Atlantic: A tropical wave is located several hundred miles east of the Windward Islands. Any development of this system should be slow to occur while the wave moves west-northwestward during the next day or two. The wave is forecast to move over the Windward Islands on Friday and then over the eastern Caribbean Sea by the weekend, where further development is unlikely due to unfavorable environmental conditions. Formation chance through 48 hours is at 10% and formation chance through 5 days is also at 10%. 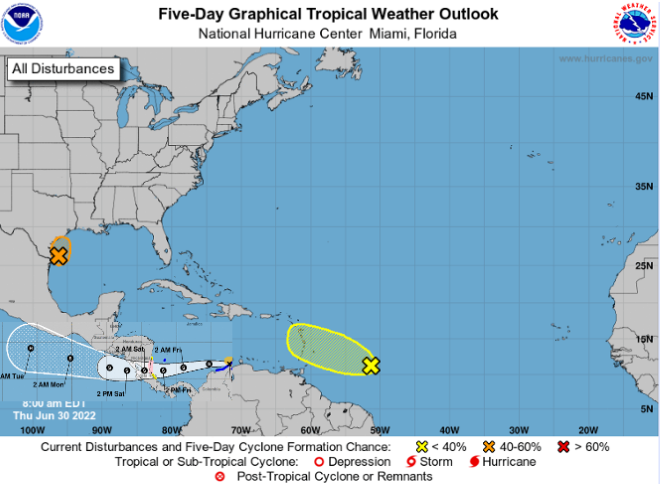