Disturbance 1. Northern Gulf of Mexico: An area of low pressure over the northwestern Gulf of Mexico is forecast to move slowly westward and approach the coast of Texas today. The disturbance has not become any better organized since yesterday. Some slow development is still possible and it could become a short-lived tropical depression near the coast before it moves inland tonight or early Thursday. Formation chance through 48 hours is at 40% and formation chance through 5 days is at 40%.

Disturbance 2. Potential Tropical Cyclone Two is expected to continue across the Windward Islands and spread into northern Venezuela through tonight. Tropical storm conditions are expected along the northwestern coast of Venezuela and northeastern Colombia tonight and early Thursday.

Disturbance 3. Central Tropical Atlantic: A tropical wave is located over the central tropical Atlantic. Slow development of the wave is possible while it moves west-northwestward for the next few days. The wave is forecast to move over the Windward Islands late Friday or early Saturday and then over the eastern Caribbean Sea by the weekend, where further development is unlikely due to unfavorable environmental conditions. Formation chance through 48 hours is at 10% and and formation chance through 5 days is at 30%. 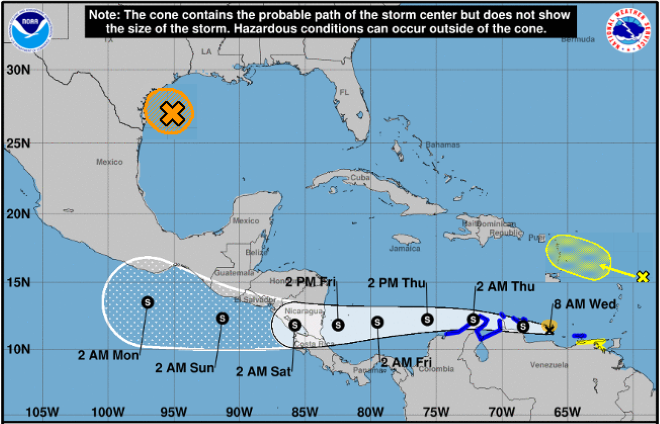