Disturbance 1. Northern Gulf of Mexico: An area of low pressure, centered over the northwestern Gulf of Mexico, remains disorganized. Some additional development of this system is possible as it moves slowly westward or west-southwestward and approaches the coast of Texas during the next two days. Formation chance through 48 hours is at 30% and formation chance through 5 days is also at 30%.

Disturbance 2. Central Tropical Atlantic: A tropical wave, located more than 1000 miles east of the Windward Islands, is forecast to interact with another tropical wave to its east over the next several days, and some gradual development is possible later this week while the overall system moves west-northwestward at around 15 mph across the central tropical Atlantic. Formation chance through 48 hours is near 0% and formation chance through 5 days is at 20%.

Disturbance 3. Potential Tropical Cyclone Two may bring tropical storm conditions along the northeastern coasst of Venezuela tonight and Wednesday. Intensity is uncertain once it reaches the southwestern Caribbean Sea late Thursday and Friday. The probable path of the system is shown to be across extreme northern South America and southern Central America.  Formation chance through 48 hours is at 70% and formation chance through 5 days is at 90%. 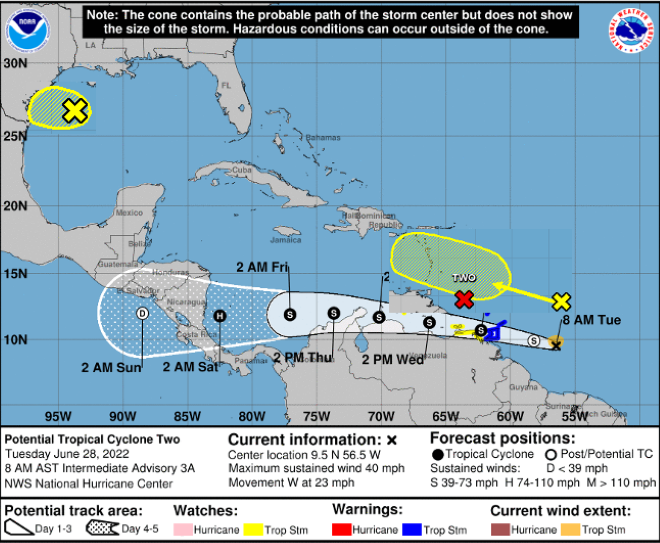