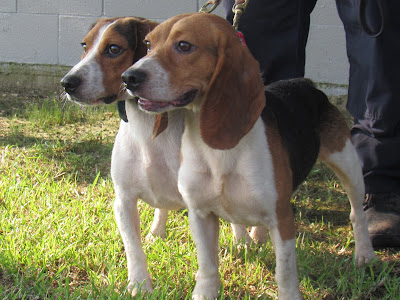 RCC personnel reported to the intersection of George Mitchell and Cora Williams Road in Bogalusa to help search for a suspect wanted by the Washington Parish Drug Task Force. Sheriff's investigators advised that the wanted man was seen running through a yard and jumped a fence. RCC K-9 officers deployed tracking dogs Jed and Biggie, who followed the scent trail for approximately 100 yards through wooded area before coming upon a yard full of tall grass and vines. The dogs continued following the track through the dense area, bringing the officers to the suspect, who was hidden under the dense vines and grass. RCC officers arrested the man and turned him over to the Washington Parish Sheriff’s office.