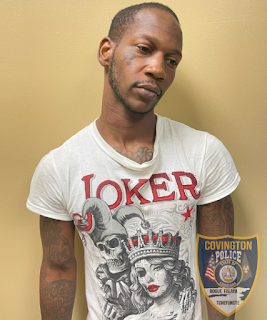 On Sunday, May 8, 2022, at approximately 5 PM, The Covington Police Department responded to numerous calls of gunshots in the area of North Briggs Street and East 34th Avenue. Several witnesses advised that, after a verbal altercation, Jamaine Grindle (age 31 and of Baton Rouge) fired several shots toward a fleeing vehicle. It was learned the vehicle was occupied by a female and three juveniles under the age of 5. Grindle then fled the area on foot as officers were arriving.

CPD officers quickly set a perimeter in the area and located Grindle in the back of a box truck. Grindle was taken into custody and charged with Attempted Manslaughter (4 Counts), Aggravated Criminal Damage to Property, Illegal Use of Weapons, Illegal Carrying of Weapons, Possession of a Firearm by a Felon, and Obstruction of Justice.

Additional charges may be added after further investigation.