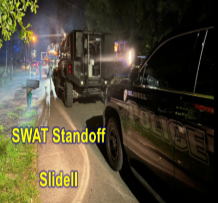 Yesterday (April 29, 2022) around 4:30pm, Slidell Police responded to the 700 block of Pine Tree Street after receiving information that 34-year-old Thomas Wells was inside of a residence and was making homicidal and suicidal threats, with two young children inside.

When officers arrived on the scene, Wells barricaded himself inside of the residence and took the two children as hostages, refusing to let them leave the residence. The Slidell Police S.W.A.T. team, along with hostage negotiators, responded to the scene. After a nearly four-hour standoff, negotiators were able to assist with the children's' safe release (unharmed), and the S.W.A.T. team successfully took Wells into custody. The incident ended around 9:40pm.

Wells was taken to a local hospital to be evaluated and treated for CS gas exposure. Slidell Police detectives are currently investigating the incident. Criminal charges are expected.