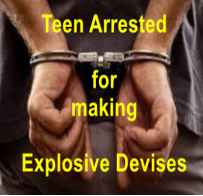 A 15-year-old boy was arrested for making explosives at his Madisonville-area home, after the St. Tammany Parish Sheriff’s Office received a tip Tuesday (March 15, 2022) through the Crimestoppers Safe School Program, alleging that the teenager was making explosive devices.

STPSO detectives obtained a search warrant that same day for the teen’s Madisonville-area residence, and enough evidence was gathered to confirm he was constructing homemade explosive devices. During the investigation, the teen also attempted to destroy evidence, which was located on his cellphone.

The teen was arrested for one count each of Manufacture and Possession of a Bomb) Obstruction of Justice. He was booked into the Florida Parishes Juvenile Detention Center.

During the investigation no evidence was located indicating he planned to use the devices at a school or had made any threats against a school.