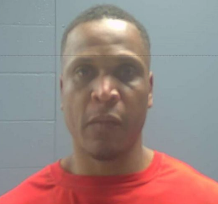 Friday (February 11, 2022) morning, Tangipahoa Parish Sheriff's Office deputies responded to a shooting reported on Cousan Rd in Uneedus and found Ryan James laying on the floor of the residence suffering from a gunshot wound to the abdomen.

Deputies soon learned the suspect was Ryan James' brother, 35 year-old Ricky Edell James, Jr. and that he had fled the scene on foot prior to the arrival of TPSO Deputies. With the assistance of the TPSO K9 Division, Ricky James was located in a wooded area near the crime scene.

Chief Jimmy Travis reports that Ricky Edell James, Jr. was taken into custody and charged with Attempted Second Degree Murder, Possession of a Stolen Firearm, and Convicted Felon in Possession of a Firearm.