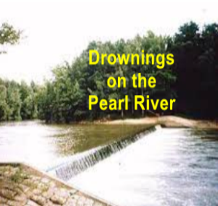 WPSO Chief Criminal Deputy advises that as of 8:00 a.m., Monday (December 6, 2021), officers from the Washington Parish Sheriff’s Office and the Louisiana Division of Wildlife and Fisheries have been unable to locate and recover the body of Eric Josh Williams, age 47 and a resident of Holden.

The body of Joe Newby, age 50  and a resident of Covington, was recovered from the Pearl River below the sill at around midnight on November 29, 2021. Williams and Newby reportedly launched a boat on the Pearl River out of Bogalusa at Poole's Bluff about a quarter of a mile north of the sill.  Investigators believe that the 14-foot vessel they were traveling in went over the sill and then capsized.

Utilizing sonar provided by the Cajun Navy, officers have been able to locate what is believed to be the boat occupied by Williams and Newby. However, due to the location of the boat on the river bottom below the Poole’s Bluff sill and the very swift and dangerous turbulent water at that location, officers have been unable to attach cables to the boat and bring it to shore.

The Washington Parish Sheriff’s Office intends to reach out to the United States Army Corps of Engineers for assistance, asking them to bring heavy equipment to the site in an effort to retrieve the boat. The Corps maintains the sill and it is believed they perhaps have a barge capable of navigating the river to the site immediately below the sill.

A video uploaded to YouTube on July 25, 2018, entitled Jeremy Magri at Pools Bluff Sill Dam and to the account of Carey Meitzler, shows the sill and provides more information.