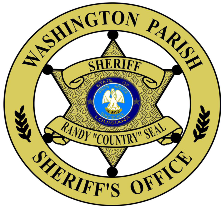 Tuesday (December 7, 2021) morning, Washington Parish Sheriff’s Office patrol deputies and detectives responded to a report of a man being shot on Mary Topps Road north of Franklinton. Officers discovered that Tremale Jenkins, an adult male, had been fatally shot by a third party during a verbal and physical altercation between two females on the scene. The shooter had fled the scene.

After gathering basic information, officers began to search for the shooter and discovered him after making a traffic stop on the vehicle in which he fled. The shooter was arrested and, after interviews with the shooter and others, was charged with second degree murder. The murder weapon, an AK-47 rifle, was recovered after a search of the property.

The shooter, a juvenile male, was transported to the Florida Parishes Juvenile Detention Center in St. Tammany Parish. The case has been referred to the District Attorney for the 22nd Judicial District. Due to his status as a juvenile, the identity of the shooter will not be disclosed.

“This is a tragic situation affecting several families,” stated Sheriff Randy Seal. “When emotions are running high and self-defense is not an issue, there is no reason to resort to firearm violence. I am grateful for the excellent work by our officers in making this arrest very quickly after the shooting and recovering the weapon.”