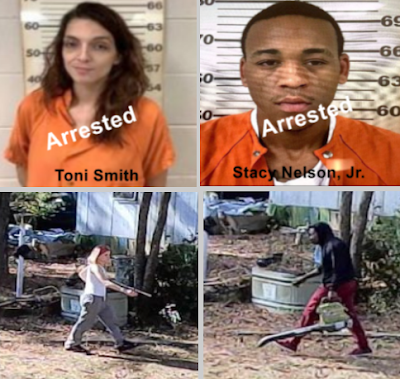 On 11/17/21, PCSO Deputies were responded to a report of a break in in the 1100 block of Old Brookhaven Rd #A. Deputies found a yellow Ford Mustang parked in the yard that the property owner advised did not belong there. While clearing the house and shed on the property, deputies found a female, later identified as Toni Smith. Smith was then taken into custody. Cameras on the property observed an unidentified black male and white female who fled the scene prior to deputies’ arrival. Smith was transported to the Pike County Jail and booked in for Burglary of a Dwelling, Burglary of an Auto, Conspiracy, Possession of Stolen Property, and Possession of a Firearm by Convicted Felon.

On 11/27/2021 at 10:12 p.m., PCSO Deputies were dispatched to Park Drive Mini Storage in reference to a report of storage units being broken into. The owner of the storage units stated that there was a white Chevrolet Tahoe stuck in a hole with a young, black male there, later identified as Stacy Nelson, Jr. There was also another black male and two black females in a gray car that left prior to Deputy’s arrival. Deputies searched the Tahoe and found items that came from the storage units and discovered that a total of six units that had been broken into. Nelson was transported to Pike County Jail and charged with Burglary X6, Possession of Stolen Property, Possession of Burglary Tools, Attempted Burglary, Possession of Controlled Substance, Possession of Paraphernalia and Introducing Contraband into a Correctional Facility.

These investigations are ongoing and more arrests are pending. The PCSO is seeking the public’s assistance in identifying the other suspects involved in these burglaries. If anyone has information on the identity of these suspects, please call Crimestoppers at 888-755-8810 or the Pike County Sheriff’s Office at 601-783-6767.