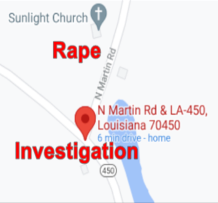 On Sunday (November 21, 2021), a Washington Parish Sheriff’s Office patrol deputy responded to a report of a female in distress at a parish  residence. When he arrived at the scene, he encountered a young woman who had knocked on the door of the residence while calling out for help. She alleged she had been raped and then thrown out of a vehicle by her assailant. The homeowner called the Sheriff’s Office for assistance.

The 28 year-old woman alleged to the deputy that she had walked to a convenience store on Columbia Street in Bogalusa about 2 a.m. that morning. She said an unknown black male picked her up and drove her into the parish near the intersection of Highway 450 and North Martin Road. She stated he pointed a pistol at her and raped her twice. Then, she stated, he opened the vehicle door and forcefully pushed her out into the roadway while he drove. She did not know her attacker but recalled that he drove a black four door vehicle with front end damage.

The victim, who had visible injuries, was evaluated by Northshore EMS and then transported to Riverside Medical Center. The WPSO detective division was notified and has assumed the investigation. Any person who might have knowledge of this incident is asked to call Detective Demmie Rice at (985) 661-2021. Callers may remain anonymous.

“Help us solve this crime,” stated Sheriff Randy Seal. “If you have any information whatsoever, please call Detective Rice. It is very important we locate this man and solve this crime before it happens to someone else. Let’s work together to help make Washington Parish safe.”