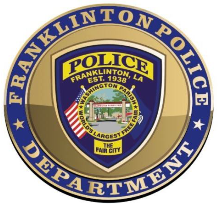 In a statement released today (November 10, 2021), the Franklinton Police Department advises that FPD “typically does not publicly release information for suicides, overdose or natural deaths.” However, their statement is being released due to inquiries by residents. Information from other sources is that a body was found in a burned-out residence on Bickham Street.

FPD reports that a 50 year-old male's body was discovered November 5, 2021. Detectives were informed the deceased had recently found out his cancer had returned. In the vicinity of his body, investigators found empty alcohol and prescription bottles.

FPD further reports that preliminary information from the coroner indicates no foul play is suspected, which is consistent with evidence recovered at the scene which would indicate a crime was not committed. The subject had no external trauma; however, the autopsy revealed significant coronary damage. Detectives are currently awaiting a toxicology report and an official cause of death from the coroner.