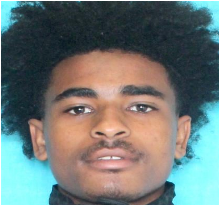 Sunday (November 28, 2021) afternoon, Covington Police Department officers were patrolling the area of W. 29th Ave. and heard multiple gunshots. It was quickly determined that a suspect, 21 year-old Nigel Magee, was shooting at an unknown subject and while doing so, fell out of the moving vehicle he was in. It was also determined that when Magee fell out of the vehicle, he dropped his cell phone that also contained his identification card. Magee attempted to get his cellphone back but decided to abandon that mission due to the unknown subject returning gunshots at him.

Luckily for Mr. Magee, the Covington Police Department was able to secure his personal belongings and secure a warrant for his arrest due to his part in this shooting incident. At this time, no one is known to be injured from this senseless shooting and the matter has been taken over by the Criminal Investigations Division. Nigel Magee currently has an active warrant for Illegal use of Weapons or Dangerous Instrumentalities.

If any members of the public know the whereabouts of Magee or information relative to this shooting investigation, you are urged to contact the Covington Police Department at 985-892-8500.

The Covington Police Department also has a free tip submitting app called “Covington PD.” To download the free app, search for “Covington PD” in the Apple App Store or Google Play Store. Once downloaded, you can anonymously send a tip directly to investigators.