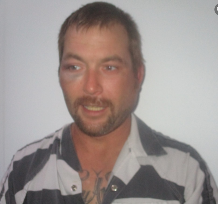 Chad Wayne Guy, age 32 and who lists a Robert, Louisiana address, was arrested by the Washington Parish Sheriff’s Office on Monday (October 25, 2021). Deputies responded to a report of screams coming from a parish residence and encountered Guy who had reportedly physically abused a female acquaintance while she held an infant in her arms. Guy was armed with a box cutter.

Guy violently resisted the deputies before he was restrained and placed in the backseat of a patrol unit. Even then, he continued to resist, banging his head against the barrier separating the front and rear seats.

At the time of the arrest, Guy was reportedly in possession of marijuana and drug paraphernalia. He was charged with those crimes in addition to domestic battery with strangulation and child endangerment, false imprisonment while armed with a weapon, resisting a police officer with force or violence and criminal damage to property.

Commenting on the arrest, Sheriff Randy Seal said, “To say Mr. Guy has an anger management problem might be an understatement. It seems obvious he has no regard for others. Violently resisting law enforcement officers is never a good tactic. You might be big or strong, but you are never big enough or strong enough. You will go to jail where you belong. I’m pleased neither of our officers were injured and that Mr. Guy could be jailed awaiting an appearance before a 22nd Judicial District Court judge.”