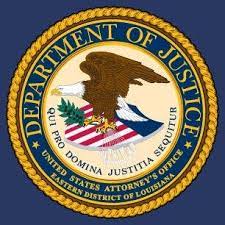 U.S. Attorney Duane A. Evans announced that David Hanson, age 63 and from Abita Springs,  and Clifford “Skip” Keen, age 53 and from Covington were each sentenced Wednesday (October 6, 2021) to 50 months imprisonment after previously pleading guilty to conspiracy to commit honest services wire fraud and soliciting a bribe.  The charges stemmed from their roles in the privatization of a work release program in Slidell that operated between 2013 and 2016.  Additionally, the two were sentenced to three (3) years of supervised release, a $10,000 fine and a $100 mandatory special assessment fee.  Restitution ordered without prejudice, with the amount to be determined at a later date.

According to court documents, Hanson and Keen, each of whom worked as Captains with the St. Tammany Parish Sheriff’s Office (STPSO) discussed with then-Sheriff Rodney J. (“Jack”) Strain about becoming owners of a work release program in Slidell, Louisiana that Strain decided to privatize. Ultimately, Hanson, Keen, and Strain agreed to make Keen’s adult son and Hanson's adult daughter owners of the Slidell work release program.

During the time St. Tammany Workforce Solutions, LLC operated the Slidell work release program, Hanson's daughter and Keen's son received not less than $1,195,000 from St. Tammany Workforce Solutions, LLC in the form of ownership disbursements, salary payments, and occasional lump sum miscellaneous payments.  They converted the majority of the money they received to cash and transferred a significant portion of the funds back to their fathers.

Additionally, it was understood that Strain would receive financial compensation from them in exchange for bestowing the right to operate the Slidell work release program on St. Tammany Workforce Solutions, LLC.   Hanson and Keen each gave Strain a portion of the payments they received in cash payoffs in amounts greater than $1,000 on a recurring basis.  Hanson also arranged for Strain’s son to receive a check in the amount of $4,000.

Strain was indicted in a sixteen-count indictment by a federal grand jury separately on August 29, 2019.  Trial in that matter is scheduled to begin on December 6, 2021.