Man Arrested Saturday of the Fair After Foot Pursuit 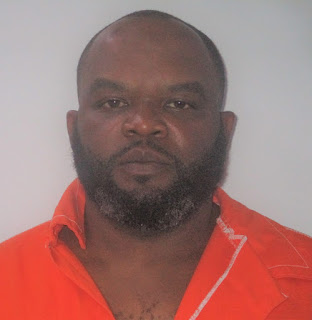 On Saturday, (October 23, 2021), a Washington Parish Sheriff's Office deputy responded to the scene of an automobile accident near the Washington Parish Fair in Franklinton to assist the Franklinton Police Department officer already on the scene. Two young children were in one of the vehicles along with the driver who was subsequently arrested.

In the course of the accident investigation, the deputy observed a bag which had been removed from one vehicle by the driver who would later be arrested. An inspection of the bag revealed a large quantity of heroin.

As more deputies and FPD officers responded to the scene, the driver fled on foot into a nearby wood line and jumped down a ravine into a creek, then began to climb the embankment on the opposite side of the creek. Officers were in pursuit and eventually were able to subdue and capture the driver, identified as Michael L. Burton, Jr., age 37 and a resident of Emma Hart Road. As officers attempted to place handcuffs on Burton, he physically resisted before officers were able to control him. He was arrested and transported to the Washington Parish Jail. Bond was set at $75,000.00.

A further search of Burton’s vehicle and possessions revealed a quantity of cocaine, methamphetamine, marijuana and other illegal drugs in addition to the heroin. He was booked into the jail on five counts of possession of illegal drugs with intent to distribute, three counts of distribution of illegal drugs, possession of drug paraphernalia, illegal use of a controlled dangerous substance in the presence of minors, resisting an officer, obstruction of justice and being a fugitive from the Louisiana Division of Probation and Parole.

Burton had another significant drug arrest in 2015. After a Washington Parish deputy sheriff responded to a disturbance at the Sportsman Inn south of Bogalusa, he learned that the suspect in the matter was being detained by the Bogalusa Police Department at a business on Cumberland Street. BPD reported the suspect had guns and illegal narcotics in his vehicle. Burton was identified as the suspect and arrested on charges of two counts of possession of illegal drugs with intent to distribute, seven counts of possession of illegal drugs, possession of drug paraphernalia, possession of a controlled dangerous substance with a weapon present and three counts of failure to appear in court. Burton was arrested again in 2016 on four counts of contempt of court.

“Both the 2021 and 2015 arrests demonstrate the wonderful working relationships we have with both the Bogalusa and Franklinton Police Departments. Both police departments, along with departments in Angie and Varnado, work closely with us at any time we need assistance and we are quick to respond to them when they request assistance. Burton’s latest arrest is a strong indicator of his strong disdain for the law, his fellow citizens and children in his custody. I congratulate the fine officers of the Franklinton Police Department for their good work in making this arrest and I extend my sincere appreciation to our deputies who assisted. Was Burton headed to the fair with the illegal drugs? We may never know the answer to that question, but we do know the illegal drugs are no longer in circulation. Neither is Mr. Burton.”