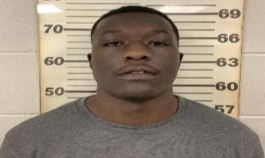 A suspect in an October 21, 2021 drive-by shooting in Magnolia, MS, in which two persons were injured, was apprehended after a chase that led into Louisiana.

The Pike County (MS) Sheriff's office advised that deputies attempted to stop a vehicle matching the description of the drive-by shooter(s) vehicle. Instead, the driver of the vehicle fled southbound on Interstate 55, crossed the state line into Tangipahoa Parish, exited westbound onto LA. 440, turned into a wooded area near LA. 1049 and LA. 440, and the driver and passenger fled into a wooded area.

The second individual in the vehicle was not apprehended.