Disturbance 1. NO THREAT TO US. The northern portion of a tropical wave over the western Caribbean Sea is forecast to emerge over the southern Bay of Campeche on Saturday.  Some gradual development of the system is expected before it moves over mainland Mexico early next week. Formation chance through 48 hours is near 0% and formation chance through 5 days is at 30%.

Disturbance 2. NO THREAT TO US. Tropical Depression Mindy is expected to cause heavy rainfall across southern Georgia and coastal South Carolina this morning, as well as tropical-storm-force wind gusts across portions of southeastern Georgia.

Disturbance 3. NO THREAT TO US. Hurricane Larry is a threat to the Bahamas, Bermuda, and the east coast of the U.S. and Atlantic Canada through the end of the week and then move toward Newfoundland on Friday night as a hurricane-force post-tropical cyclone.

Disturbance 4. NO THREAT TO US AT THIS TIME. A strong tropical wave is expected to emerge off of the west coast of Africa on Saturday.  A tropical depression could form by early next week as it moves west-northwestward over the far eastern Atlantic near the Cabo Verde Islands. Formation chance through 48 hours is near 0% and formation chance through 5 days is at 50%. 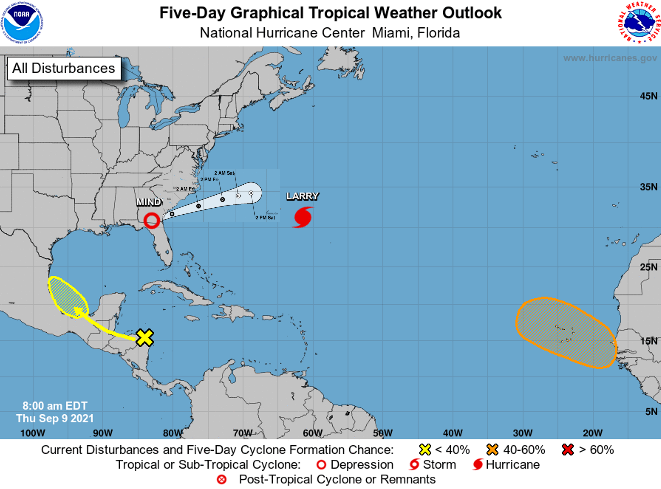