Disturbance 1. NOT A THREAT TO US. Tropical Storm Peter is moving west northwest at 14 mph with sustained winds at 50%. Peter is expected to pass north of the Leeward Islands early this week. Interests in the northern Leeward Islands, Virgin Islands, and Puerto Rico should monitor the progress of this system.

Disturbance 2. NOT A THREAT TO US. Tropical Storm Rose is moving northwestward over the eastern Tropical Atlantic at 15 mph with maximum sustained winds at 40 mph. Rose is forecast to begin a slow weakening trend around Tuesday.

Disturbance 3. KEEP AN EYE ON THIS. A tropical wave located over the far eastern tropical Atlantic several hundred miles south-southeast of the Cabo Verde Islands is showing signs of organization and a tropical depression is likely to form by Friday while the system moves westward at 10 to 15 mph across the eastern and central tropical Atlantic Ocean. Formation chance through 48 hours is at 20% and formation chance through 5 days is at 70%.

Disturbance 4. NOT A THREAT TO US.. A storm-force, non-tropical low pressure system, the remnants of Odette, is located a couple of hundred miles southeast of Newfoundland.  This low could acquire some subtropical characteristics by the middle of this week as it moves slowly southeastward over warmer waters across the north-central Atlantic Ocean before moving northward out of the area over the weekend. Formation chance through 48 hours is near 0% and formation chance through 5 days is at 30%. 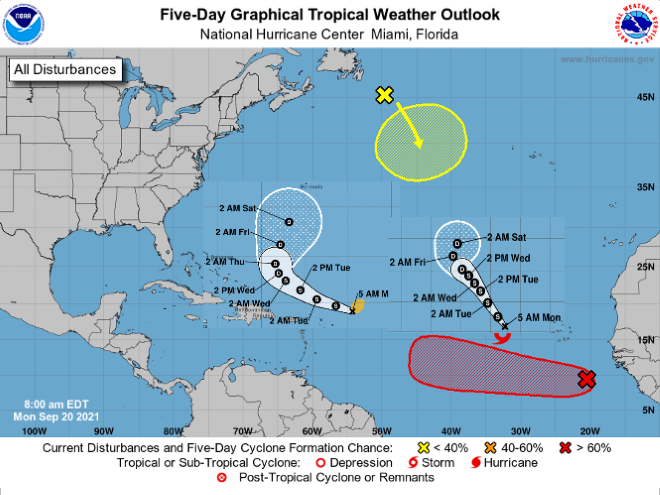