Disturbance 1. The remnants of Post-Tropical Cyclone Nicholas is drifting northwest into western Louisiana and flash flooding remains possible across portions of the central Gulf Coast Friday and Saturday. Flash Flood Watches are in effect along sections of the central Gulf Coast from southeast Louisiana across southern Mississippi and southern Alabama into the Florida Panhandle.

Disturbance 2. The low pressure located about 150 miles east of Cape Hatteras, North Carolina is still likely to become a short-lived tropical depression or tropical storm before it makes a transition to a non-tropical gale-force low by Saturday or Saturday night while moving northeastward at about 15 mph away from the United States mid-Atlantic and Northeast coasts. Formation chance through 48 hours is at 70% and formation chance through 5 days is also at 70%.

Disturbance 3. A tropical wave and broad area of low pressure located about midway between the Lesser Antilles and the Cabo Verde Islands is likely to form into a tropical depression over the weekend or early next week while moving toward the west-northwest at 15 to 20 mph across the central tropical Atlantic and then near or north of the Leeward Islands by Monday and Tuesday.  Formation chance through 48 hours is at 60% and formation chance through 5 days is at 70%.

Disturbance 4. A tropical wave over the far eastern tropical Atlantic is forecast to be only marginally conducive for development and any development of this system should be slow to occur over the next few days while the system moves toward the west-northwest or northwest at 5 to 10 mph over the far eastern Atlantic. Formation chance through 48 hours is at 10% and formation chance through 5 days is at 20%. 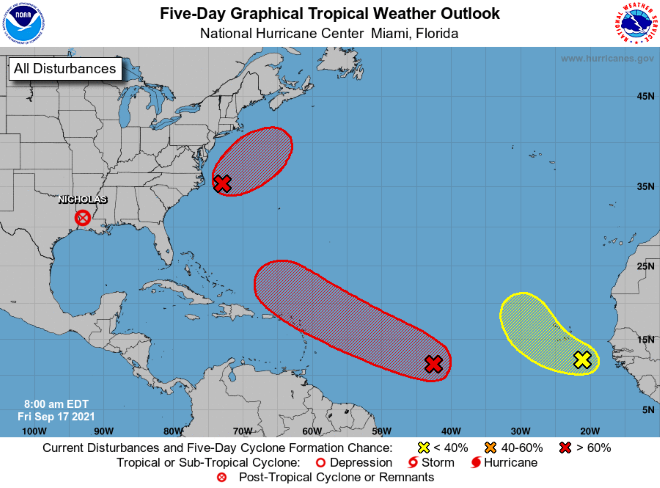