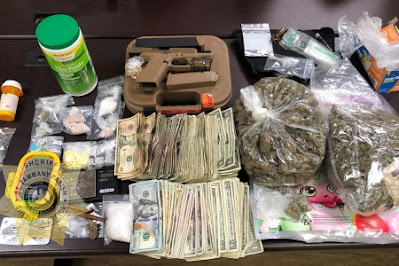 At the homes, which were located in the 37000 block of Ben Thomas Road and in the 800 block of Magnolia Street in Slidell, detectives seized the following items: approximately 7 grams of crack cocaine, approximately 2.5 pounds of marijuana, approximately 5 grams of fentanyl/heroin mixture, 3.8 grams of MDMA pills/powder, seven Vyvanse pills, five Tramadol pills, 60 Hydrocodone 10mg pills, 14.9 grams of powdered cocaine, two Suboxone 8mg strips, 63.9 grams of methamphetamine, 29.5 grams of heroin, and a Glock 9mm with a tactical pistol light and an extended magazine. Detectives also seized $1,712 in cash believed to be proceeds from drug sales and a 2015 Nissan Altima, which was used to facilitate the drug sales.

As a result of the investigation, detectives arrested six individuals.