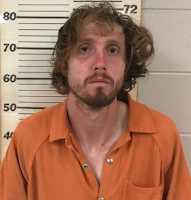 On Monday (September 27, 2021), Pike County Sheriff's Office deputies responded to a report of shots fired in the 4000 block of Van Norman Curve Rd. Deputies determined that Jeremy Walton was trespassing on the property and had run into the woods prior to deputies’ arrival. No one was injured on scene.

While canvassing the area, deputies found a blue F-150, parked on the west side of the old Magnolia Electric building. Detectives were able to contact the owner and determine the vehicle was stolen. Walton was seen in the same vehicle earlier that day. Walton was later taken into custody in the same area.

Walton was charged with Felony Taking of a Motor Vehicle and Possession of a Stolen Firearm with more charges pending.