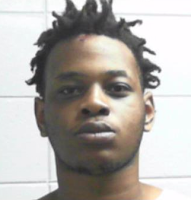 The following statement was released by the Bogalusa Police Department:

On Monday, September 20th, the Bogalusa Police Department was notified of shots fired in the 1100 block of Main Street with one subject hit by gunfire. Upon arrival, Officers discovered that a 13 year old child had been shot while walking down Main Street, shortly after getting off of the school bus. The child suffered multiple gunshot wounds, and responding officers rendered first aid until the arrival of emergency medical services. While officers worked the shooting scene, it was discovered that a single vehicle crash had occurred on Main Street at North Avenue, a short distance from the scene of the shooting. Officers learned that a male subject had exited the vehicle and fled on foot. After a brief search, Officers encountered the subject on the area of Columbia and East 6th Street and he was taken into custody. The child was transported by ambulance to the Emergency Room, and later flown to a trauma center.

Based on information obtained during the initial investigation, the subject apprehended due to the vehicle was crash was considered a suspect in the shooting, but there were no eye witnesses to the shooting and no firearm was recovered. The suspect, Andrew Pernell, 18 years of age, was identified as the driver of the crashed vehicle and was charged with reckless operation of a motor vehicle, leaving the scene of an accident, and resisting an officer. Pernell denied any involvement in the shooting. He was booked into the Bogalusa City Jail and the investigation continued. On Tuesday, September 21st, Detectives located a 9mm handgun near the scene of the vehicle crash, believed to be used in the shooting. Other evidence was also obtained linking Pernell to the shooting. On Tuesday evening, Detectives charged Pernell with Attempted Second Degree Murder, Illegal Use of Weapons, and Possession of a Firearm with an Obliterated Serial Number.

The victim sustained serious injuries, but is currently in stable condition.

The investigation into Pernell’s activities continues. Anyone with any information involving this latest shooting is asked to call the Bogalusa Police Department or Crime Stoppers.