Disturbance 1. A tropical wave over the eastern Caribbean Sea is expected to develop into a low pressure system over the southwestern Caribbean Sea and then into a tropical depression late this week or this weekend. The system is forecast to be into the southwestern Gulf of Mexico by Sunday. Formation chance through 48 hours is near 0% and formation chance through 5 days is at 60%.

Disturbance 2. A broad trough of low pressure over the central tropical Atlantic about 900 miles east-northeast of the northern Leeward Islands. Little development is not expected to develop the next day or two due while it moves northwestward at about 15 mph. A tropical depression could form by the end of the week while the system turns eastward over the central Atlantic. Formation chance through 48 hours is at 20% and formation chance through 5 days is at 60%.

Disturbance 4. Henri is basically "out of here" 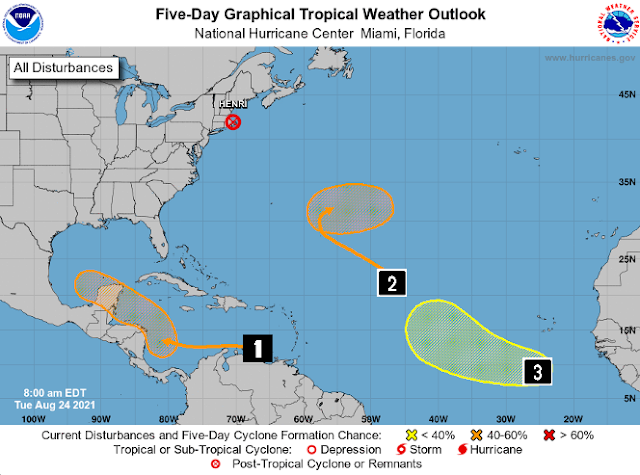