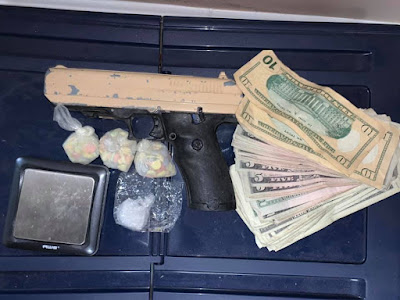 On June 27, Pearl River Police Officers responded to a disturbance in which Shane Siemssen (age  29) reportedly pointed a gun at another individual during a verbal argument. As Officers arrived, Siemssen fled on a motorcycle and led Officers on a dangerous, high speed chase which Officers canceled for public safety reasons. While Pearl River Police Detectives were obtaining arrest warrants for Siemssen, they learned that he was a convicted felon and was currently on probation.

On July 19, Pearl River Police Officers received information that Siemssen was at a residence in Pearl River and conducted surveillance. After confirming Siemmssen was inside the residence, Officers made entry and apprehended him. Pursuant to a search warrant of the residence, Officers located a firearm with an obliterated serial number, three bags containing a large amount of multi colored pills believed to be MDMA (ecstasy), a bag containing crystal meth, a digital scale and approximately $300 in U.S. currency.

Siemssen was charged with Aggravated Assault, Possession of a Firearm by a Convicted Felon, Aggravated Flight from an Officer, and multiple possession with the intent to distribute controlled dangerous substances charges.

Siemssen’s probation officer was notified of the charges