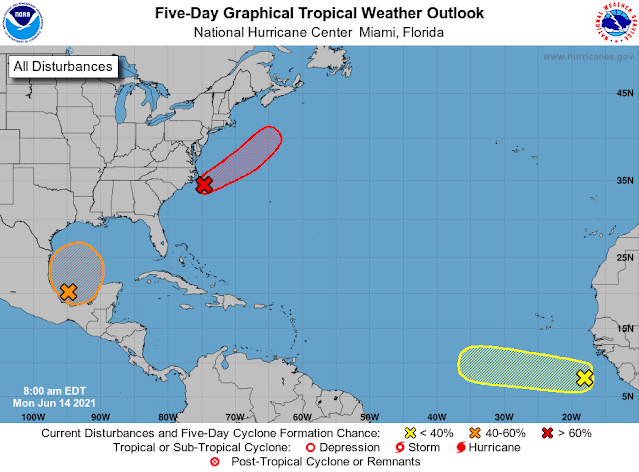 Disturbance 1. Showers and thunderstorms located over the Bay of Campeche are associated with a broad low pressure area. Gradual development of this disturbance is possible during the next couple of days while it meanders near the coast of Mexico, and a tropical depression could form late in the week when the system moves northward into the central Gulf of Mexico. Regardless of development, heavy rainfall is possible over portions of Central America and southern Mexico during the next several days. Formation chance through 48 hours has increased to 20% and formation chance through 5 days has increased to 60%.

Disturbance 2. A well-defined low pressure system located about 90 miles southeast of Cape Hatteras, North Carolina, is acquiring more tropical characteristics. A tropical depression or tropical storm is likely to form later today or tonight.  This system is expected to move northeastward away from the United States and move over colder waters south of Nova Scotia on Wednesday, ending any opportunity for development by midweek. Formation chance through 48 hours is at 70% and formation chance through 5 days is also at 70%.

Disturbance 3. A strong tropical wave just offshore of west Africa is producing disorganized shower and thunderstorm activity.  Some development of this system is possible during the next few days before a combination of dry air aloft and strong upper-level winds limit any chance of formation while the wave is over the central tropical Atlantic Ocean late week. Formation chance through 48 hours is at 10% and formation chance through 5 days is at 20%.