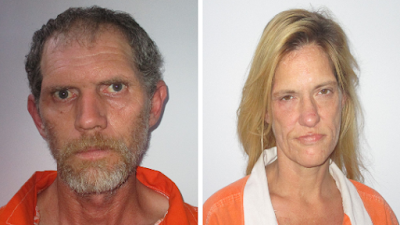 On May 2, 2021 and after a citizen’s report of a carelessly operated vehicle on Highway 25 south of Franklinton, officers responded and intercepted Heath Jonathan Barber, age 43 and a resident of Highway 10. Deputies received permission to search Barber’s vehicle and discovered illegal drugs and a loaded 20 gauge shotgun. A search of the criminal justice database indicated Barber had outstanding warrants in Washington Parish. He was booked into the Washington Parish Jail on charges of possession of a controlled dangerous substance with a weapon present, possession of illegal drugs with intent to distribute, criminal damage, theft and failure to appear in court.

Barber has two previous stays in the Washington Parish Jail. In 2010, he was booked on charges of two counts of aggravated assault with a firearm. A 2012 arrest resulted in a charge of cruelty to animals.

Also on May 2, 2021, an officer responded to T. Brumfield Road after a citizen reported a suspicious person in the area. The deputy discovered Tabitha Perriloux Lowe, age 41, hiding in the bushes. He detained her after a search of the criminal justice database revealed she had outstanding warrants in Washington Parish. In addition, she was in possession of illegal drugs. Lowe was taken into custody and booked into the jail on charges of three counts of contempt of court and one count of possession of illegal drugs.

Lowe has four previous stays in the Washington Parish Jail. In 2018, she was booked into the jail on a charge of possession of illegal drugs. She was arrested twice in 2019 for possession of drug paraphernalia and contempt of court. In 2020 she was arrested for two counts of failure to appear in court and driving while under suspension.

“In each case, a concerned citizen led officers to wanted persons,” stated Sheriff Randy Seal. “We are always grateful for good information from the public and will respond when requested to do so. I compliment our officers for their diligence.”