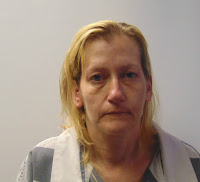 On May 25, 2021, Aimee Lynette Galloway, age 46 and a resident of Galloway Road, was arrested and booked into the Washington Parish Jail charged with two counts of false report of a crime, terrorizing and injuring public records.

The incident leading to Galloway’s arrest began the previous day when she reported an ex-boyfriend attempted to gain entry into her house by kicking in the door. The investigation revealed that the accused person was actually working in Lafayette at the time of the falsely reported crime. After a thorough investigation by several Washington Parish Sheriff’s Office deputies, it was determined that the reported crime did not occur.