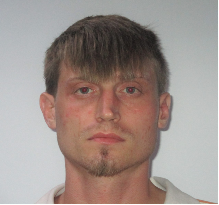 After having been notified by the St. Tammany Parish Sheriff’s Office of an outstanding warrant on a Washington Parish man, the wanted man was spotted by detectives from the Washington Parish Sheriff’s Office Drug Task Force on May 5, 2021. When officers attempted to stop him in Franklinton, he fled, leading Washington Parish and Franklinton Police Department officers on a high speed chase through Franklinton, then east on Highway 436. Louisiana State Police laid out spike strips near the intersection of Choctaw Road and Highway 436. The suspect vehicle evaded one set of spikes but a rear tire was punctured by the second set.

In spite of a damaged tire, the driver continued at a high rate of speed, turning south on Highway 62 and then east on Highway 10. The high speed pursuit ended near Dollar Road when the driver lost control of the vehicle and crashed. The driver fled on foot with officers in pursuit. When officers caught up with him, a physical altercation occurred until the driver was subdued.

Dylan Shad Jenkins, age 27 and a resident of South Choctaw Road, was taken into custody and transported to the Washington Parish Jail where he was booked on charges of being a fugitive from St. Tammany Parish, assault on an officer, resisting an officer by flight and aggravated flight. He will be held without bond pending transfer to St. Tammany Parish.

Jenkins should be quite familiar with the interior of the Washington Parish Jail, having been there five previous times. In 2011, he was arrested for aggravated burglary. In 2012, he was arrested for another aggravated burglary, theft by fraud and simple escape. A 2013 arrest on domestic abuse with child endangerment and failure to appear in court earned him an additional jail stay. Jenkins was arrested on numerous charges in 2014, including two counts of possession of illegal drugs, resisting an officer with force or violence, battery on a police officer, resisting an officer by flight, unauthorized entry of an inhabited dwelling, criminal damage, possession of drug paraphernalia and simple escape. In 2017, Jenkins once again fled from an officer before he was arrested and booked into the Washington Parish Jail on charges of aggravated flight from an officer, battery on a police officer, resisting an officer with force or violence, three counts of theft, theft of a firearm, criminal damage to property and being a convicted felon in possession of a firearm.

“It seems Jenkins likes to flee from officers and fight with them,” stated Sheriff Randy Seal. “This is not good, not good at all. His extensive criminal activity indicates he has absolutely no regard for society and no intention of being a good citizen. Jail is a good place for him and I’m pleased our parish and municipal officers were able to arrest him.”