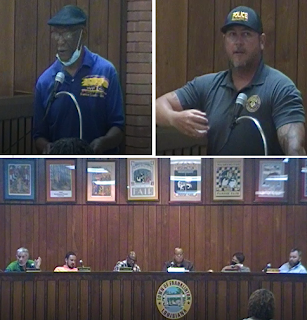 Tuesday (May 25, 2021) evening's meeting of the Franklinton Mayor and Board of Aldermen started off with accusations of racism and insubordination by Frankie Crosby against Police Chief Justin Brown (beginning at 3:30 into video of the meeting). Crosby stated that a Facebook page by the Chief suggested Brown to be a “disingenuous and uncaring Chief of Police”. Chief Brown refuted the charges and stated that he answers to the Mayor and Board of Aldermen and said to Crosby "I do not answer to you".

Crosby stated he was elected and Brown was appointed. However, Crosby was elected to the Washington Parish School Board and does not exercise any authority or have supervision over the Franklinton Police Chief. In addition, Crosby was placed on the Agenda as “Mr. Frankie Crosby of FOCUS Franklinton to address the Mayor and Board”. However, Crosby later admitted that he was not speaking as a representative of FOCUS Franklinton.

After the “rocky” start, the meeting was productive. The Mayor and Board addressed non-controversial personnel matters, awarded bids on surplus equipment, introduced an ordinance to levy sales taxes approved by the voters (Public Hearing and vote to be held in two weeks), and heard departmental reports from Municipal Clerk Ellen Waskom (beginning at 23:40 into video of the meeting) and Franklinton Police Chief Justin Brown (beginning at 28:30 into video of the meeting).

Members of the Board provided comments (beginning at 46:25 into video of the meeting): Mr. Butler spoke about the water line break at the hospital; Mr. Descant spoke about Animal Control challenges and responses by Amwaste to waste collection issues; Mr. Sharp emphasized the detail and value of the financial information provided by the Municipal Clerk; Mr. Spears praised the employees of the town.