Brian Purvis, a Covington-area man is wanted on attempted murder and robbery charges following an incident, which occurred Wednesday (April 21, 2021) evening in the Bush area. 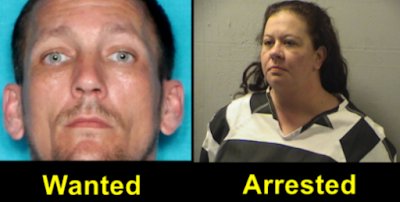 Shortly after 5 p.m. Wednesday, St. Tammany Parish Sheriff’s deputies were dispatched to a residence in the 83000 block of Jenkins Cemetery Road in reference to an attempted armed robbery.  A male and female told responding deputies they were parked outside of the residence when they were approached by Brian Purvis, with whom they were acquainted. He produced a firearm and demanded property and valuables. As the victims drove off, Purvis fired upon them,  striking their vehicle.

As deputies responded to the scene, Purvis and a white female, later identified as 41-year-old Tiffany Smith (AKA Tiffany Whitehead), fled the residence on foot into a heavily wooded area. Responding deputies, with the assistance of an STPSO K9, attempted to locate Purvis and Smith for several hours. K9 Lex located and apprehended Smith hiding near a creek under heavy brush, but Purvis eluded capture and is still wanted.

Smith was transported to a local area hospital and later released. She was subsequently transported to the St. Tammany Parish Jail, where she was booked on one count of Accessory After the Fact. She was also booked on an outstanding warrant for Failure to Appear. Bond has been set at $52,500.00.

Warrants were issued for Purvis’ arrest on Thursday morning for two counts of Attempted Murder and one count of Attempted Armed Robbery.