In an updated news release dated February 27, 2021, the Louisiana State Police advised that on February 25, 2021, Troopers from Louisiana State Police Special Victims Unit rebooked 28-year-old Joseph William Haidler of Mandeville into the St. Tammany Parish Jail on three additional counts of computer-aided solicitation of a minor. Haidler was originally arrested in the United States Virgin Islands and extradited back to St. Tammany Parish in July of 2020 on charges of trafficking of a child for sexual purposes, rape, and computer-aided solicitation of a minor. Click here for the original story

Troopers learned that after his initial arrest, Haidler continued using a popular social media application “Snapchat” to solicit girls between the ages of 13-15 for sexually explicit content. Search warrants were obtained for several of the alleged accounts, which revealed the names of over one thousand potential victims to whom he reached out to through Snapchat. In each of the accounts, Haidler sent photographs of an open computer screen depicting a bank balance of tens of thousands of dollars, and would ask the girls if they wanted a "sugar daddy". He would also send two particular photographs of himself.

Haidler appears to be targeting high school aged girls in St. Tammany Parish. Haidler was out on bond when it was learned he solicited additional victims who have since been identified. Attached are two photographs allegedly sent by Haidler from various alias accounts. If anyone has information regarding this case, please contact the Louisiana State Police Special Victim's Unit- New Orleans office: 504-310-7000. 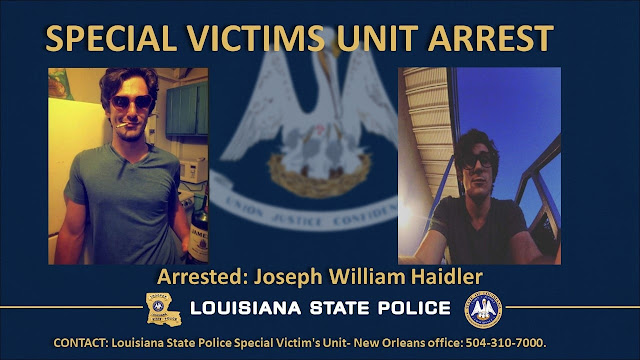